Came across these beauties some while back, this week looking for some peices that were interesting and had integrity and opted for some in a project I am carrying out at work.

I am sure you will agree the ethos behind this creative work sets the humble cushions to  a more elevated position. 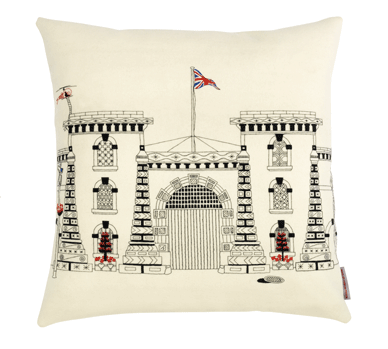 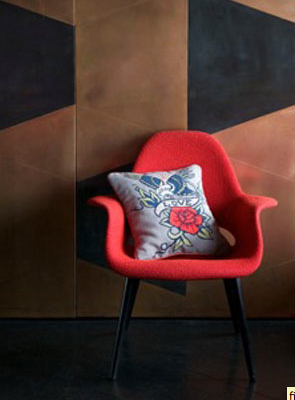 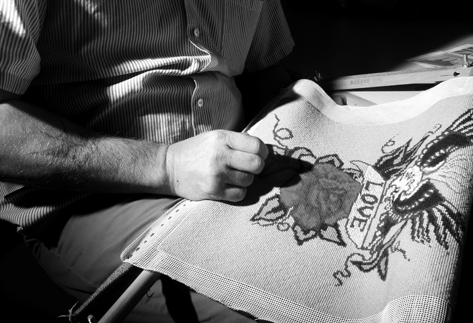 The benefits of Fine Cell Work

INTERVIEW WITH AN EX-PRISONER

I served 7 years, just under.  I was doing Fine Cell Work for 6 ½ years. I wanted something to do. I was bored sitting in my cell…when you got nothing it’s hard. And you just sit there thinking about outside, children, wife and what you’re missing.

The main thing in prison is to keep in contact with your family. It’s the most important thing… But you can’t afford to do it. You could write a letter but some people can’t write. And the sewing’s so easy to do, and that’s the best bit, because a lot of people in prison are illiterate. They can’t read and write and they can’t count. But you teach them to count to ten and they can do the sewing.

That’s all I did…I sewed and sewed…cos you get upset and there’s not a lot you can do. You can’t show any weakness inside. So it just gets more and more built up and then you get angry. So with the sewing it just made me stop and think about how things could have been different…and what I could have done myself to be different. I calmed down and started thinking I could have done this when I was outside, going down the pub and things like that, I could have spent time with the family. Just silly little things come to mind, into your head whilst you’re sewing. And it surprises you.

It helped me change the way I was…cos I use to be quite an angry fella when I went inside, I was quite moody and aggressive and people pointed out I was defensive. I never knew I was but when I was sewing I use to go back over my life and thought…perhaps I am. It gave me the space I needed. And that’s why people started to trust me more. When you’re in your cell with another person it gets a bit claustrophobic. So you’re always on edge. I used the sewing to get into my own world.

And where before if I’d be angry with someone I’d let you know, by that time I could, well, walk away and then go back and apologise if I was a bit rude to somebody. And it just went from there. Little steps. But you get there in the end.

I did loads of courses…all the courses they offered me. When I went to prison I had no qualifications. I just left school when I was 14 and started work so never actually got qualifications. I did all the courses they offered, all the key skills. It got to the point where the prison service offered me to go onto Maths OU (Open University) and said they’d pay.

Fine Cell Work made me think about the simple stuff I use to do when I drink and why I use to drink. See I had a lot of affairs before I went to prison and then I’d drink to deal with the affairs and forget them. My ex-wife and I were together 12 years but never really had a conversation. We’d be embarrassed to say certain things. I was 21 when had first kid.  I use to work 7 days a week. I had quite a big drink problem.

After about 2 years in prison I realised that my life was leading me to prison. But before you could have asked me and I’ve have been like, no, I’m in control of it… It all started when my wife had post-natal depression and to get my own back I’d go down the pub… And when I went to prison she had to go onto income support and what she had to spend on herself a week she had to live on her and 3 children and pay all the bills.

Talking to the children

I talk the children quite a lot. My youngest son nearly got into a fight the other day. I tried to explain to him the consequences. When I came out the kids thought it was big and clever that I’d been in prison. My son’s friends go in for a couple of months here couple of months there and they think it’s all clever and it’s not. They don’t really do prison, they just do 2 months. They just go there and see their friends. I tried to explain to them it’s not as nice as people make out. When they was living in London they was quite angry and aggressive. But now they’re up with me they’ve calmed down.

They see the big difference in me. They still remember how I used to be. And they used to think it was big and clever I could look after myself. But now I explain to them that it’s just stupid. Takes a bigger person to walk away.

And I start explaining to them about all the silly things I use to do when I was sewing, they laugh at sewing. But you can work through. All through one word, sorry. The only way I got to that was through sewing. That’s why I changed my life. Hope that’s making sense.

Because I had things to do, I was not in prison in my head. And it all came from the sewing really. You can easily become part of the prison system. But through the sewing I could afford to have a half hour on the phone every evening and that gets me out that mindset I’m in prison. And then when that doors shut I’m not on my own because I’m thinking about the children. But if you’ve got nothing then you’re just sitting there, eating and sleeping, and you become institutionalised for the rest of your life. That’s why you have to go into a hostel, to see how you’d cope. But luckily when I got out, I was in the hostel for a couple of months and got myself a job, car.

Teaching and being taught

Ann and Marjorie (his teachers) were like my mum. Ann use to send us postcards when she went on holiday. And with Marjorie, she use to beat me up (laughs). I’d walk in and if I hadn’t done enough work she’d give me a slap. But I use to take the mick. It wasn’t like prisoner and staff, it was just two friends. I made sure that they were safe, and Marjorie if she felt that she was unsafe with someone she’d say is he alright? And I didn’t mind that.

Some times with the officers there’s just an instant dislike. But some of them used to come in and they liked the work and they’d come talk to you about it and say oh I’m doing this at home, I’m stuck with this could you help? Especially with the quilting, because they think oh I’ll go home and do that, that’s a good idea. It don’t take a lot of your time to show people what to do, after you’ve been doing it for such a long time.

A lot of people think it’s quite amusing though, my mums friends, and they say you must be able to sew anything. My mum does a patchwork class. They want me to go in show them how to make quilts. They say it looks really hard but I say it’s not hard it’s quite easy…